Course for the Qualification 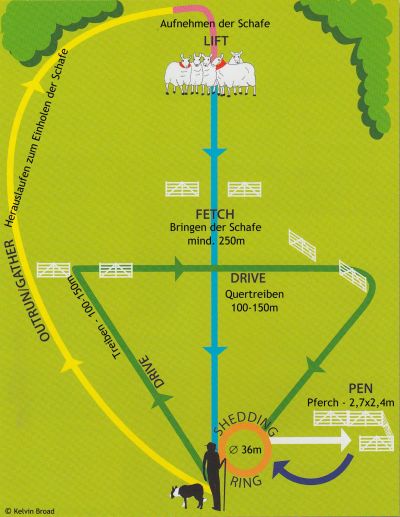 Dog and handler start at the post at the bottom of the field.
The dog is sent out either clockwise or anticlockwise behind the set of five sheep (two of them marked with collars) at the top of the field (Outrun, length: about 400 m) to get them to move ( Lift).
The dog fetches the sheep through the Fetchgate and around the handler at the post (Fetch).
Then the dog drives the sheep to the first Drivegate, then across the field to the second Drivegate and into the Shedding Ring (Drive, length of the driving: about 420 m).
Now the handler leaves the post and walks to dog and sheep into the Shedding Ring. In the Shedding-Ring two of the three unmarked sheep are separated, and the dog has to take over the control about these separated sheep (Shedding).
Then the sheep are reunited and dog and handler drive the sheep into the pen (Pen). After the pen, the dog and handler take the sheep back into the Shedding Ring, where one of the two marked sheep has to be shed off (Single).

Course for the Final 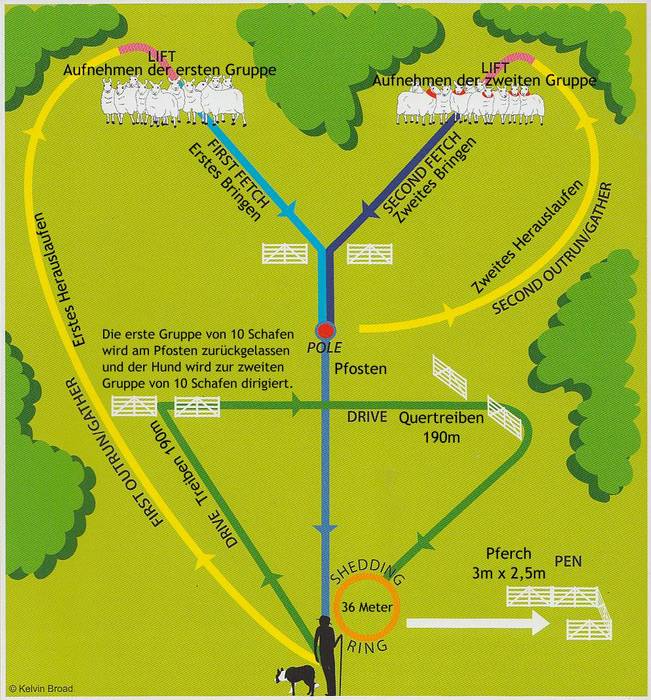 Dog and Handler start at the post at the bottom of the field.
The dog is sent clockwise behind the first set of 10 sheep at the top of the field (Outrun 1, length: about 800 Meter), to get them on the move (Lift 1).
The dog drives the sheep through the Fetchgate (Fetch 1).
Then the dog is sent again, this time anticlockwise, behind the second set of sheep (Outrun 2, length: around 800m) to get them on the move as well (Lift 2) and to fetch them through the Fetchgate (Fetch 2) to the first set.
The dog then fetches the whole set of now 20 sheep to the Handler and around the post and drives them to the first Drivegate, then to the second Drivegate and into the Shedding Ring (Drive, length of the driving: about 550 Meter).
Now the handler walks to his dog and the sheep into the Shedding-Ring to separate the five marked sheep from the rest (Shedding).
Dog and Handler drive these five sheep into the Pen (Pen).

It's decided in advance which set of sheep (the left or right set) has to be fetched first and whether the Drive has to be clockwise or anticlockwise.